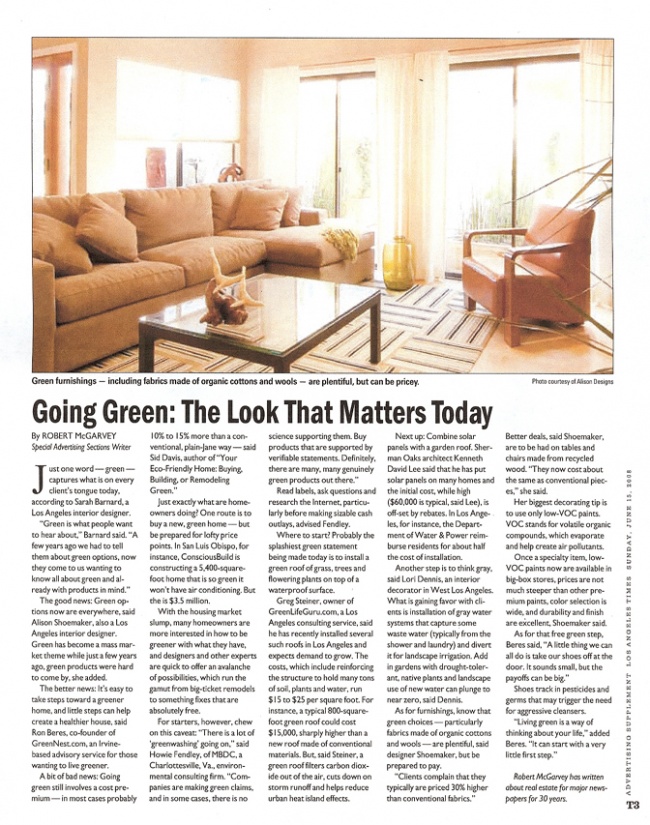 Just one word-green –captures what is on every client’s tongue today according to Sarah Barnard, a Los Angeles interior designer.

“Green is what people want to hear about,” Barnard said. “ A few years ago we had to them about green options, now they come to us wanting know all about green and already have products in mind.”

The good news: “Green options are now everywhere”, said Alison Shoemaker, also a Los Angeles interior designer. “Green has become a mas market while just a few years ago green products were hard to come by”, she added.

The better news: “It’s easy to take steps toward a greener home, and little steps can help created a healthier house”, said Ron Beres, co-founder of GreenNest.com, an Irvine based advisory service for those wanting to live greener.

Just exactly what are homeowners doing? One route is to buy a new, green home, but be prepared for a lofty price. In San Luis Obispo, for instance, ConsciousBuild is construction a 5,400 sq ft home that is so green it won’t have air conditioning, but is worth $3.5 million.

With the housing market slump, many homeowners are more interested in how to be greener with what they have and designers and other experts are quick to offer an avalanche of possibilities, which run the gamut from big ticket remodels to something fixes that are absolutely free.

“Another step is to think gray”, said Lori Dennis, an interior in West Los Angeles. “What is gaining favor with clients is installation of gray water systems that capture some wastewater (typically from showers and laundry) and divert it for landscape irrigation. Add in gardens with drought tolerant, native plants and landscape, and the use of new water can plunge to near zero”, said Dennis.

“As for furnishings, know that green choices, particularly fabrics made of organic cottons and wools are plentiful”, said designer Shoemaker, but be prepared to pay. Her biggest decorating tip to use only low VOC paints.

“Living green is a way of thinking about your life,” added Beres. “It can start with a very little first step.”