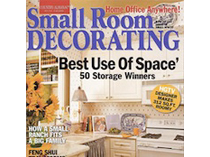 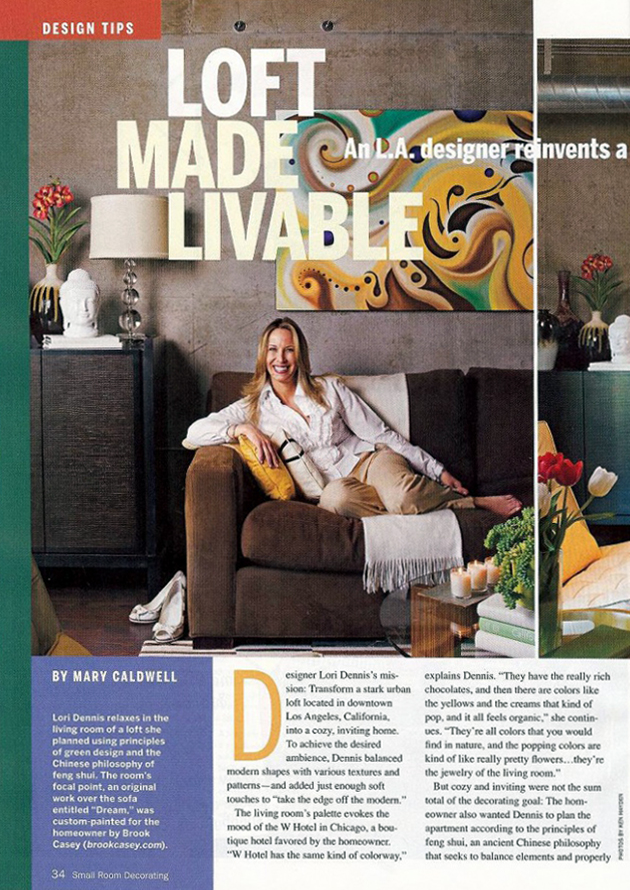 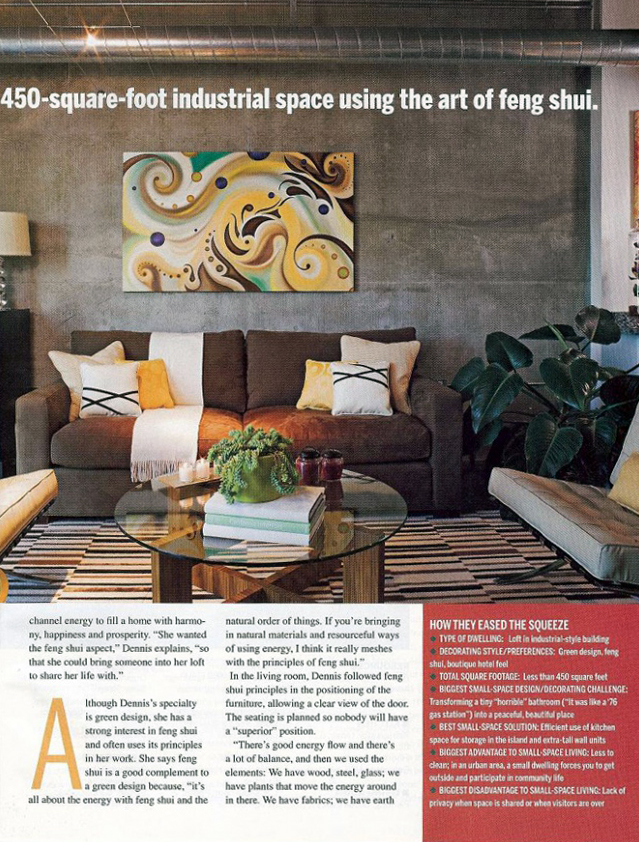 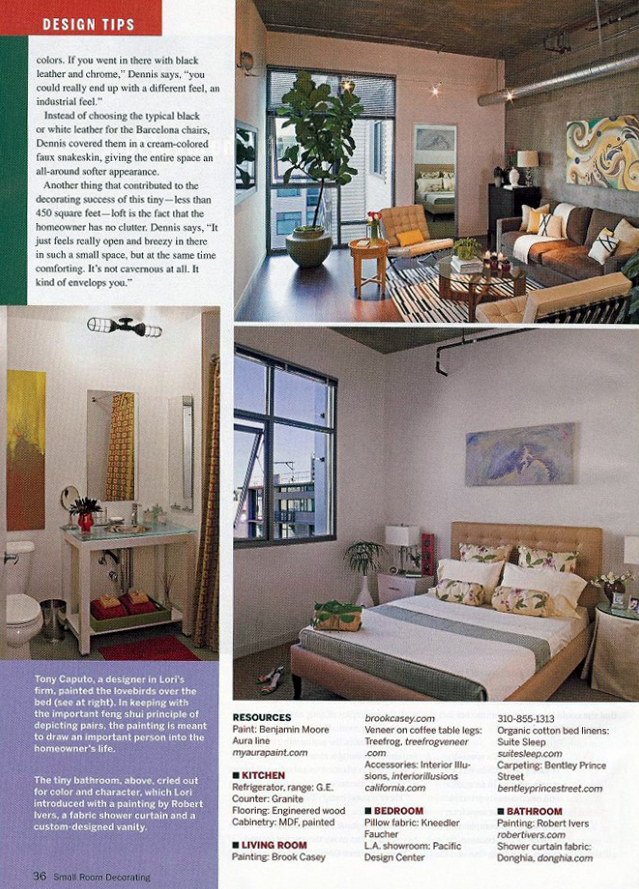 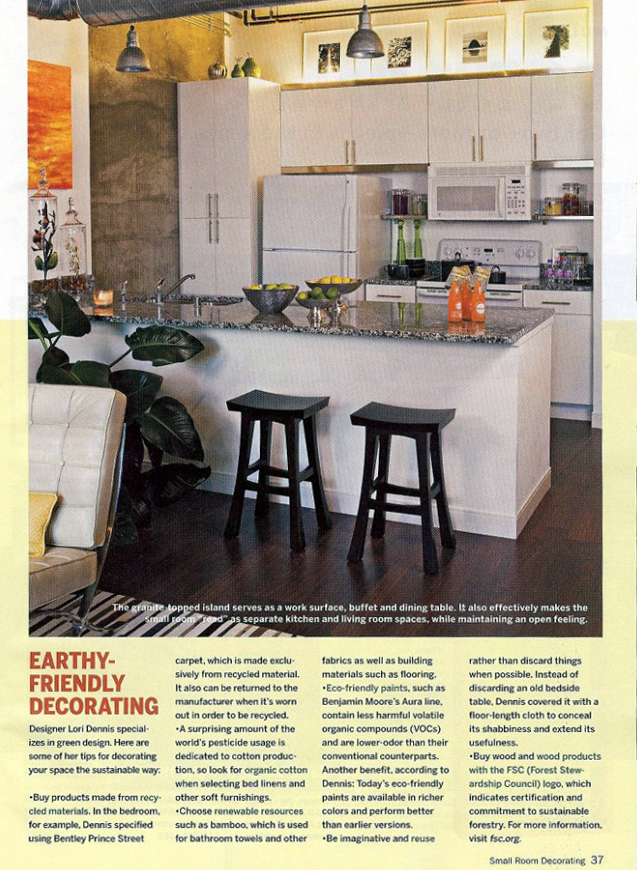 Lori Dennis relaxes in the living room of a loft she planned using principles of green design and the Chinese philosophy of feng shui. The room’s focal point, an original work over the sofa entitled “Dream,” was custom-painted for the homeowner by Brook Casey (brookcasey.com).

Designer Lori Dennis’s mission: Transform a stark urban loft located in downtown Los Angeles, California, into a cozy, inviting home. To achieve the desired ambience, Dennis balanced modern shapes with various textures and patterns—and added just enough soft touches to “take the edge off the modern.” The living room’s palette evokes the mood of the W Hotel in Chicago, a boutique hotel favored by the homeowner. “W Hotel has the same kind of colorway,” explains Dennis. “They have the really rich chocolates, and then there are colors like the yellows and the creams that kind of pop, and it all feels organic,” she continues. “They’re all colors that you would find in nature, and the popping colors are kind of like really pretty flowers…they’re the jewelry of the living noom.” But cozy and inviting were not the sum total of the decorating goal: The homeowner also wanted Dennis to plan the apartment according to the principles of feng shui, an ancient Chinese philosophy that seeks to balance elements and properly channel energy to fill a home with harmony, happiness and prosperity. “She wanted the feng shui aspect,” Dennis explains, “so that she could bring someone into her loft to share her life with.”

Although Dennis’s specialty is green design, she has a strong interest in feng shui and often uses its principles in her work. She says feng shui is a good complement to a green design because, “it’s all about the energy with feng shui and the natural order of things. If you’re bringing in natural materials and resourceful ways of using energy, I think it really meshes with the principles of feng shui.” In the living room, Dennis followed feng shui principles in the positioning of the furniture, allowing a clear view of the door. The seating is planned so nobody will have a “superior” position. “There’s good energy Row and there’s a lot of balance, and then we used the elements: We have wood, steel, glass; we have plants that move the energy around in there. We have fabrics; we have earth colors. If you went in there with black leather and chrome,” Dennis says. “you could really end up with a different feel, an industrial feel.” Instead of choosing the typical black or white leather for the Barcelona chairs, Dennis covered them in a cream-colored faux snakeskin, giving the entire space an all-around softer appearance. Another thing that contributed to the decorating success of this tiny—less than 450 square feet—loft is the fact that the homeowner has no clutter. Dennis says, “It just feels really open and breezy in there in such a small space, but at the same time comforting. It’s not cavernous at all. It kind of envelops you.”

Designer Lou Dennis specializes in green design. Here are some of her tips for decorating your space the sustainable way:

Tony Caputo, a designer in Lori’s firm, painted the lovebirds over the bed (see at right). In keeping with the important long shui principle of depicting pairs, the painting is meant to draw an important person into the homeowner’s life.

HOW THEY EASED THE SQUEEZE TYPE OF DWELLING: Loft in industrial-style building

BIGGEST SMALL-SPACE DESIGN/DECORATING CHALLENGE: Transforming a tiny”horribte” bathroom (“It was like a’76 gas station’) into a peaceful, beautiful place

BESTSAIALL-SPACE SOLUTION: Efficient use of kitchen space for storage in the island and extra-tall wall units

BIGGEST ADVANTAGE TO SMALL-SPACE LIVING:Less to clean; in an urban area, a small dwelling forces you to get outside and participate in community life

BIGGEST DISADVANTAGE TO SMALL-SPACE LIVING: Lack of privacy when space is shared or when visitors are over