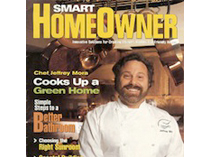 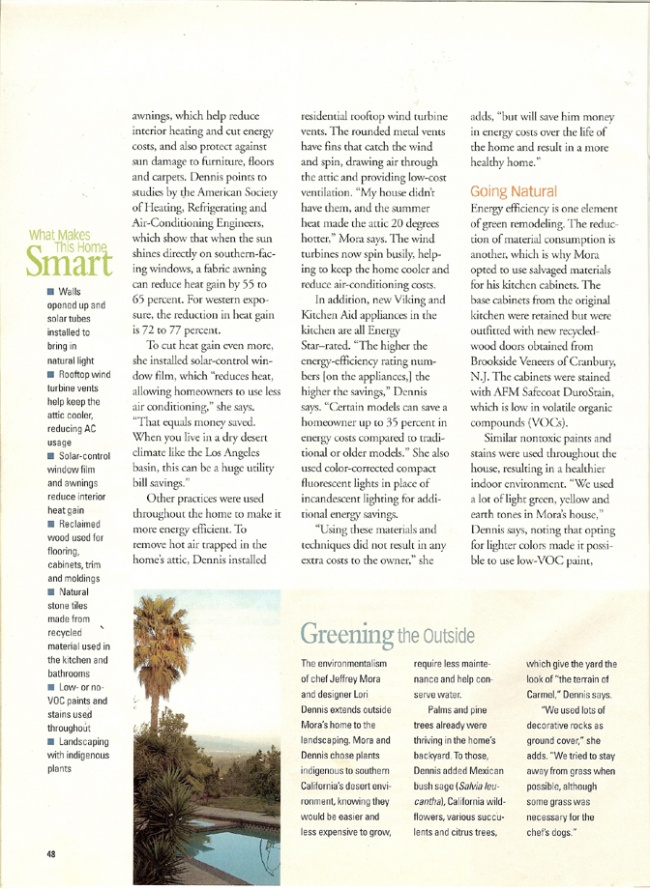 COOKING UP A GREEN HOME

L.A.-based chef Jeffrey Mora whipped up a green home with the help of designer Lori Dennis.

To dish up a green, energy-efficient home, you have to start with the right ingredients. For Jeffrey Mora, chef to the Los Angeles Lakers and L.A. Kings, that meant eco-friendly building materials such as natural stone, reclaimed woods, and nontoxic paints and stains, as well as solar-control window film, rooftop wind turbines, Energy Star appliances and low-energy fluorescent lighting to help reduce energy costs.

Greenbuilding is the obvious choice for anyone who values the environment, say Mora, who embarked on a culinary career at the age of 20. A member of the 1992 and 1996 U.S. Culinary Olympic teams, he now owns Metropolitan Culinary Services, based in Burbank, California. “Environmental concerns are important to me,” he says. “It’s easy to sit on the sidelines and watch, but being involved gives me a feeling I can’t begin to describe.”

More has been involved in the sustainability in many ways. He has served on the boards of the National Marine Sanctuary Foundation, the Earth Pledge Foundation, Oceana and other environmental organizations. He has promoted sustainable foods and demonstrated how to prepare sustainable cuisine in such diverse locales as Greece and New Zealand. And he has brought his environmental concerns home with him.

“People don’t realize how much power they have until they try.” He says. “The power of one can be an amazing thing.”

Cabin in the Woods

When Mora relocated in 2004 from quaint Carmel-by-the-Sea on California’s Monterey peninsula to an older home he owned in Los Angeles, he decided his new digs desperately needed a makeover. But the constraints of a demanding career prevented him from undertaking the task alone. So after conducting an Internet search, he hired Lori Dennis, a Beverly Hills-based architectural design firm focusing on sustainable design, to help him with his green remodel.

Going into the renovation, Mora knew what he wanted. He missed that special Carmel-feeling of his old place, and he decided his primary goal was to make his L.A. home feel more life the Carmel residence. Built in the 1970’s, the L.A. house was outdated in design and needed serious attention. On top of that, the utility bills were through the roof, especially when summer temperatures soared to 90 degrees or higher.

When Dennis talked with Mora about his goals, she learned the chef had rented out his home to tenants who had let the place fall into disrepair. “He wanted it all changed and fast,” she recalls. “He gave me a budget an idea of what he wanted, along with a time frame, and let me go.

Being aware of Mora’s love of the Monterrey peninsula and the outdoors, as well as his passion for environmentalism, helped her steer the project to success. The goal, Dennis says, was to create an “upscale cabin in the woods,” since the four-bedroom, 3,800-square-foot home, located north of Los Angeles in the San Fernando Valley, sits on a woody plot of land in the middle of a wild and natural landscape peppered with mature cypress trees. “It feels like a small forest.” Dennis says.

The quest for a woodsy feel, sustainable design and energy efficiency inspired Dennis when making decisions about everything from the floor plan to lighting to color and tile selection. She began by examining the home’s orientation to the sun and issues such as natural lighting, both of which had an effect on the home’s energy use.

Let There Be Light

An energy-efficient home, Dennis says, “takes the architecture of the house into consideration in terms of airflow and the amount of sunlight and heat coming into the home. Heating and cooling are the biggest costs for homeowners.”

For Mora’s home, Dennis started by removing a large part of a major wall on the first floor, which allowed natural light to flow into the back of the house and visually opened up the space. It also improved airflow. “Before, you could feel dead air in the rooms,” Dennis says.

She installed tubular sky-lights in smaller rooms, such as a hallway and the laundry area, to provide natural lights, which reduced the need for electric light. An added benefit, she says, is that “everyone looks better and feels better in natural sunlight.”

The tubular skylights are roof-mounted light collectors consisting of an acrylic lens set into a metal frame, with a reflective sun scoop in the rooftop assembly that directs sunlight into a tube. Sunlight is diffused to the interior and spread evenly throughout the room.

Just as letting light into certain areas of the home was useful in some instances, blocking it at other times was equally important. To keep out the bright afternoon sun on warm days, Dennis used double-lined draperies to cover windows throughout the home. “In the afternoon, when the stifling west sun beats on the house, the drapes make an enormous difference,” she says, adding that homeowners should “consider using a fabric that can withstand the abuse of the sun.”

She also installed exterior awnings, which help reduce interior heating and cut energy costs, and also protect against sun damage to furniture, floors and carpets. Dennis points to studies by the American Society of Heating, Refrigerating and Air-Conditioning Engineers, which show that when the sun shines directly on southern-facing windows, a fabric awning can reduce heat gain by 55 to 65 percent. For western exposure, the reduction in heat gain is 72 to 77 percent.

To cut heat gain even more, she installed solar-control window film, which “reduces heat, allowing homeowners to use less air conditioning,” she says. “That equals money saved. When you live in a dry desert climate like the Los Angeles basin, this can be a huge utility bill savings.”

Other practices were used throughout the home to make it more energy efficient. To remove hot air trapped in the home’s attic, Dennis installed residential rooftop wind turbine vents. The rounded metal vents have fins that catch the wind and spin, drawing air through the attic and provide low-cost ventilation. “My house didn’t have them, and the summer heat made the attic 20 degrees hotter,” Mora says. The wind turbines now spin busily, helping to keep the home cooler and reduce air-conditioning costs.

In addition, new Viking and Kitchen Aid appliances in the kitchen are all Energy Star-rated. “The higher the energy-efficiency rating numbers [on appliances,] the higher the savings,” Dennis says. “Certain models can save a homeowner up to 35 percent in energy costs compared to traditional or older models.” She also used color-corrected compact fluorescent lights in place of incandescent lighting for additional energy savings.

“Using these materials and techniques did not result in any extra costs to the owner,” she adds, “but will save him money in the energy costs over the life of the home and result in a more healthy home.”

Energy efficiency is one element of green remodeling. The reduction of material consumption is another, which is why Mora opted to use salvaged materials for his kitchen cabinets. The base cabinets from the original kitchen were retained but were outfitted with new recycled wood doors obtained from Brookside Veneers of Cranbury, N.J. the cabinets were stained with AFM Safecoat DuroStain, which is low in volatile organic compounds (VOC’s).

Similar nontoxic paints and stains were used throughout the house, resulting in a healthier indoor environment. “We used a lot of light green, yellow and earth tones in Mora’s house,” Dennis says, noting that opting for lighter colors made it possible to use low-VOC paint.

What Makes This Home Smart

The environmentalism of chef Jeffrey Mora and designer Lori Dennis extends outside Mora’s home to the landscaping. Mora and Dennis chose plants indigenous to southern California’s desert environment, knowing they would be easier and less expensive to grow, require less maintenance and help conserve water.

Palms and pine trees already were thriving in the home’s backyard. To those, Dennis added Mexican bush sage (Salvia leucantha), California wild flowers, various succulents and citrus trees, which give the yard the look of “the terrain of Carmel,” Dennis says.

“We used lots of decorative rocks and ground cover,” she adds. “We tried to stay away from grass when possible, although some grass was necessary for the chef’s dogs.